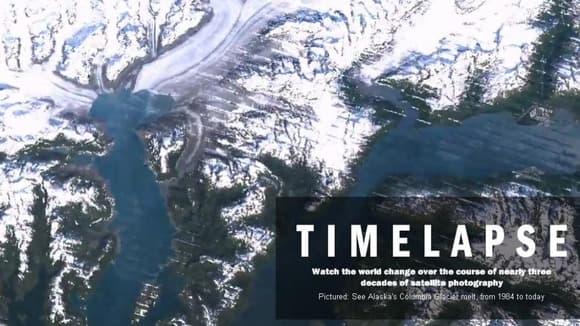 In 2013, Google partnered with Carnegie Mellon University in order to put together an amazing series of timelapse images of Earth that show the changes that have occurred on our planet over the last 30 years. This compilation was made possible because of satellite photos acquired from Landsat, a joint mission between the USGS and NASA. Landsat is a series of satellites that are in constant orbit over the Earth. They have been recording our planet since 1984, and they were meant to serve as a public monitoring system--a record of how the human species was altering the surface of the planet. Now, you can access all of this information from your own home. But be warned, depending on where you look, it may be a bit of a harrowing journey. The state of the rainforests is particularly appalling.

"Two generations, eight satellites and millions of pictures later, the space agency, along with the U.S. Geological Survey (USGS), has accumulated a stunning catalog of images that, when riffled through and stitched together, create a high-definition slide show of our rapidly changing Earth. Over here is Dubai, growing from sparse desert metropolis to modern, sprawling megalopolis. Over there are the central-pivot irrigation systems turning the sands of Saudi Arabia into an agricultural breadbasket — a surreal green-on-brown polka-dot pattern in the desert. Elsewhere is the bad news: the high-speed retreat of Mendenhall Glacier in Alaska; the West Virginia Mountains decapitated by the mining industry; the denuded forests of the Amazon, cut to stubble by loggers....These Timelapse pictures tell the pretty and not-so-pretty story of a finite planet and how its residents are treating it — razing even as we build, destroying even as we preserve. It takes a certain amount of courage to look at the videos, but once you start, it’s impossible to look away."

To give you an idea of what you are in for, here is a video of the destruction of the Amazon Rainforest:

Take a look at the videos and see the interactive Earth here (you can even type in your own address and watch it change over 30 years).