10 Years at Saturn: NASA Flashback Of A Decade 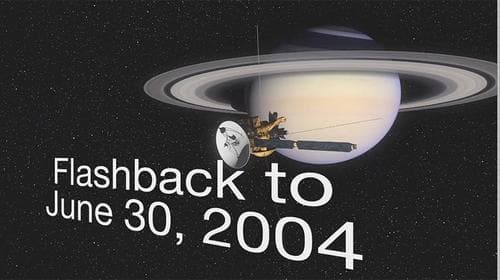 Ten years ago (on June 30, 2004), we reached Saturn. After a long journey from Earth (Cassini left our pale blue dot in 1997), the international Cassini-Huygens mission finally arrived in orbit around the ringed planet. It was a long and expensive voyage (costing about 3.2 billion dollars), but it was well worth the trip. In early 2005, NASA’s Cassini spacecraft delivered the European Space Agency’s Huygens probe to Titan. This marked the first ever landing on a moon orbiting in the outer solar system. In 2008, Cassini completed its four-year primary mission, but it didn't stop there. It went on to perform a plethora of additional flybys of Saturn's various satellites: Titan, Enceladus, and the planet's other icy moons. In fact, it is still on its journey. With any luck, the mission could continue another few years (estimates put it at 2017). But there's no harm in hoping for at least another decade.